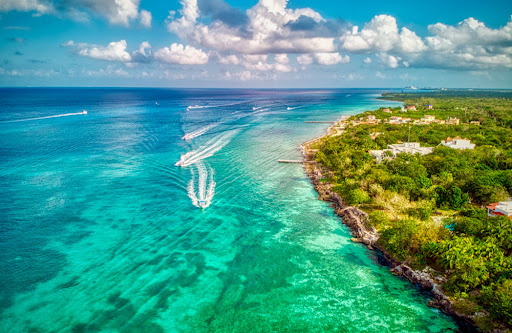 Jorge is a man who believes in the wisdom and experience of the past. His kind and outgoing demeanor help him convey his beliefs in the mysterious Mayan culture, calendar, predictions and even life beyond this world. As a guide and salesman on the Mexican island of Cozumel, Jorge helps people understand the importance of looking to the past to understand our future. This is his story:

In a society that has long overlooked the power and importance of women, Jorge describes how his love of Mayan culture and studies, led him to respect women. He explained his wife and three daughters have shown him greater insight into how to have compassion, patience, love and understanding towards others. Yet as much as Jorge credits this to his wonderful wife and daughters and the individuals they are, the joy they bring and the lessons they’ve taught him, he also credits the Mayans for his ability to respect and even revere women.

Jorge explains the evidence from the Mayan ruins, calendar and especially their temple on Cozumel dedicated to the Goddess (not God) Ixchel. The Goddess of Fertility Ixchel was held as one of the most important and fierce gods in the Mayan culture. From the famous Mayan calendar, which ended with the year 2012, Jorge says he can see the hint and predictions of women becoming more and more important in the 21st century. He points to the hispanic nations and the women leaders as evidence of this foreknowledge coming to fruition. He expects the Mayan predictions for women will only become stronger and feels the time is nearly here for the President of the United States to also be a woman.

Jorge hopes that the compassion and kindness of women, who are slower to anger and quicker to understand and show empathy, will put the world on a better path to peace and prosperity. Despite the fact that as he explains, “the Mayans had help from the higher powers above and those from other worlds,” to elevate their society to revering women, Jorge feels our current society is on a similar path without alien help. He sees the future as bright and hopeful.

With a focus on peace and gentleness, Jorge feels that the leaders of the world could benefit from a female perspective. As more embrace the lessons of the past from great societies like the Mayan we can achieve a greater harmony in the world. Jorge will continue to preach this doctrine as he travels back and forth from Utah in the United States, working summers as a landscaper, and Cozumel, Mexico to draw into his Mayan roots and ancestors.

Jorge’s belief in the past, a higher power, the Mayan society and women lead him to generate a perspective that he feels will breed peace. The lessons from the past about compassion and understanding, even towards our enemies, has produce better global prosperity than any other factor. His focus on this belief guides his every day actions to connect with people, provide service and find happiness in his family life.

To really make an impact on the world, Jorge believes we must learn from our past and ancestors and understand what gave them power and what gave them chaos. He highlights women rulers as times of innovation and peace, and men rulers as times of greed and pride that led to ruin. Regardless of the gender factor, Jorge’s perspective on selflessness leading to success and prosperity seems to be a universal truth in all times, peoples and nations.